YEMEN: Millions on the brink of starvation 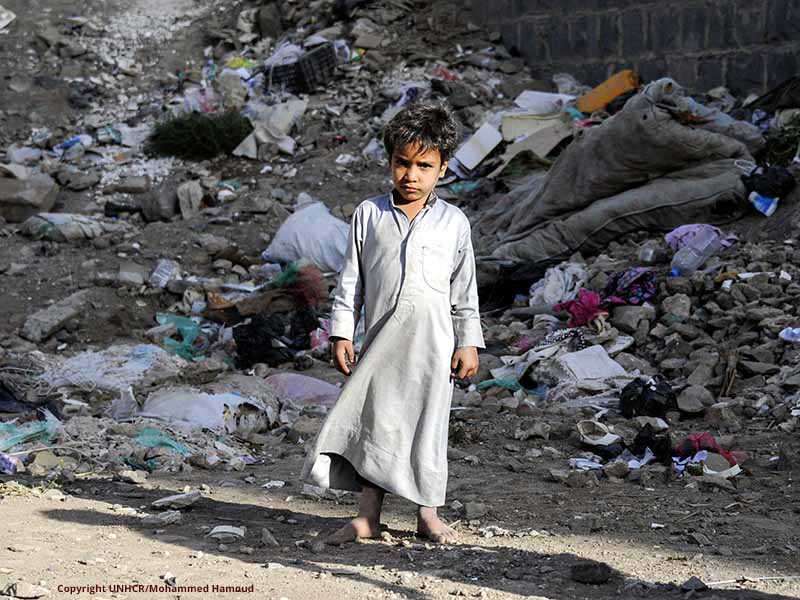 HAMEED STAGGERED, hardly able to walk.* He was gaunt and haggard. Hameed’s family of nine had fled to a makeshift camp for displaced Yemenis after their house was destroyed. The family struggled to survive with almost nothing to eat or drink. Like many Yemenis, they stood at the threshold of starvation. When rain fell, they collected as much as they could in buckets

When CAM contacts in Yemen found Hameed, they gave him a desperately-needed basket of food. Hameed bowed his head with tear-filled eyes and said, “God only knows how much trouble I faced to feed my family, but suddenly, you came like an angel sent from God to save me and my family!”

WHAT IS THE PROBLEM?

Yemen, the poorest country in the Middle East, has been devastated by war. An estimated 8.4 million people are at the brink of starvation and thousands are displaced from their homes. Scores of citizens have lost their lives, while tens of thousands have been injured. Over 80 percent of the country’s nearly 27 million people are in dire need of food, medicine, water, and shelter. The United Nations calls this “the world’s worst humanitarian crisis.”

The crisis began in early 2015 when a rebel group, known as the Houthis, seized control of part of the country and forced Yemen’s president to flee abroad. Saudi Arabia and neighboring countries began fighting the Houthis in an attempt to restore the government and ensure their continued influence in Yemen.

Since then, war has raged between the two sides. Constant airstrikes have left Yemen’s roads nearly impassable. Partial blockades of Yemen’s ports delay delivery of life-saving medicine. It is not uncommon for sick people to die en route to the hospital due to rough roads and blockades.

There are no official reports confirming how many people have died. The United Nations stopped updating the number of casualties more than two years ago, after 10,000 civilians had died. That number did not even include those who had died of disease and malnutrition.

Airstrikes have severely damaged water systems and sewage treatment plants, forcing people to drink water polluted with feces and urine. That, combined with poor sanitary conditions and a woeful healthcare system, has led to the world’s worst cholera outbreak. Over 1.1 million cases of this deadly sickness have been reported. Visitors to a cholera camp saw dozens of patients lying motionless on the earthen floor, and a mother helplessly watching her child take his last breath.

On August 9, a bus crammed with school children stopped briefly in a poor village in northern Yemen. In that short time, an airstrike hit nearby, blasting the bus into a mass of twisted metal. Fifty-four people died. Among them were 44 children. Elsewhere in Yemen, tens of thousands of landmines kill and maim people. Even in playgrounds, innocent children at times lose arms or legs.

Recently, scheduled U.N.-backed peace talks failed before they even began. This means fighting is likely to intensify, with no end in sight. People all over the country are looking for peace.

GOD HAS NOT FORGOTTEN

In spite of the enormous crisis in Yemen, it has received relatively little attention in the West. Yet God has not forgotten Yemen and the Light continues to spread. The believers of Yemen need our support and prayers as they face tremendous challenges and intense suffering along with their countrymen.

The food, water, hygiene kits and other essential items that we are able to share with the Yemeni people demonstrates God’s compassion by meeting their physical needs. The needs are great. Our goal for this project is $1.5 million.  If you wish to help, your support will be a blessing.

*actual name of recipient not used