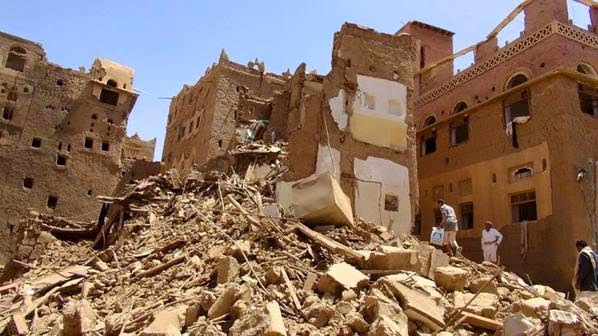 Yemen is a poverty-stricken country on the Arabian Peninsula that is being ravaged by war. Since the war in Yemen broke out in early 2015, thousands of people have died and millions are facing shortages of food, water, and vital supplies. More than half of the people of Yemen struggle to find enough to eat. Working through reliable contacts, CAM has been able to provide food to some of those who are suffering.

Marwa* is a Yemeni widow with disabled children. Her son was not going to school because he was trying to provide food for himself and his mother and brothers. Every morning he would go out and collect plastic bottles to sell, but he barely earned enough to provide a little bread for the family. Sometimes he found leftovers that restaurants had dumped in the trash, and he would take them home to his family. Thanks to the food parcels that Marwa has begun receiving through CAM, her son no longer needs to go out and scrounge for food. Instead, he was able to enroll in school again.

In addition to food, there is a desperate need for clean drinking water in Yemen. We recently helped to provide water collection systems to over one hundred families. These systems allow families to collect rainwater from their roofs, store it in large tanks, and filter it so that it is safe to drink. One person said, “Before this project we were really in desperate need of water. We thank those who sponsored the project and those who implemented it. This project has given life to our spirits.”

Like most Middle East conflicts, the war in Yemen is complex, with both religious and political implications. Sunni Muslims who support Yemen’s president are fighting against Shi’ite rebels who are allied with a former president. The involvement of Saudi Arabia and other wealthy countries in the region has caused the war to grind on. While there have been recent attempts at peace talks, to date they have all been fruitless. On August 13, another round of airstrikes by Saudia Arabia killed 19 people, most of them Yemeni school children.

In the midst of this chaos, the radical Islamist group Al-Qaeda has prospered in Yemen and now controls large sections of the country. People who live in Al-Qaeda-controlled areas report that the group is cruelly oppressive.

The people of Yemen are far away and hidden from our view, but it is a privilege to be able to share with them in their time of need. If you are able to assist with this project, your help will be greatly appreciated.

If you wish to contribute to other Crisis Projects please click here.