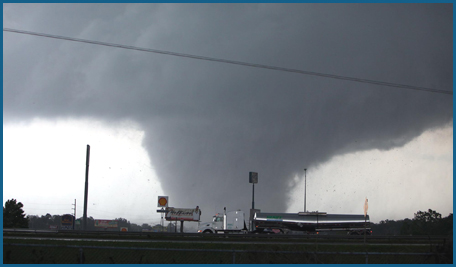 (Photo credit: Associated Press)
A tornado moves through Tuscaloosa, AL. Wednesday, April 27. A wave of severe storms laced with tornadoes strafed the South on Wednesday, killing at least 16 people around the region and splintering buildings across swaths of an Alabama university town.

Over 300 people were killed and others are missing from the severe storms and tornadoes which pounded the south on Tuesday and Wednesday. Alabama was hit hardest; also effected were Tennessee, Mississippi, Georgia, Virginia and Arkansas. Dozens more were killed in the previous week from hundreds of other tornadoes. Wind speeds up to 200 mph were recorded. Hundreds of homes were destroyed

“In a matter of hours these deadly tornadoes, some the worst that we’ve seen in decades, took mothers and fathers, sons and daughters, friends and neighbors, even entire communities,” President Obama said in a speech Thursday.

CAM’s Rapid Response teams across the south are actively helping with clean-up in a number of places. We are also looking at setting up our Loaves and Fishes Kitchen to serve hot meals to people in areas without electricity. Coming later will probably be several DRS bases to help with rebuilding.

Contributions are very much appreciated.

… the Lord hath his way in the whirlwind and in the storm. Nahum 1:3

There may be openings for volunteers if you or others that you know of would be open to volunteering then please let us know.