Syria’s tragic civil war rages on. Warring parties jockey for control, none strong enough to end the war, none weak enough to lose. Peace-making attempts have been futile.

For countless ordinary Syrians, the brutal war has meant the death of loved ones, ruined homes, a collapsed economy, and mind-numbing fear. Missile strikes, suicide bombings, sniper attacks, and kidnappings are routine. Entire villages have been under siege for months. People, desperate to survive, eat dogs, cats, and donkeys. 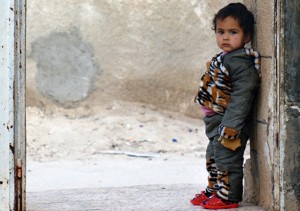 A Syrian who distributes relief aid inside the country said, “The people we visit are broken and hopeless. They are overwhelmed by fear, hunger, sickness, and explosions.”

Nine million Syrians have fled their homes, driven either by fear or the destruction of their houses. Over 2 million have escaped to neighboring countries; 6 1/2 million are displaced inside Syria.

Lebanon, Syria’s neighbor, shelters 900,000 refugees. One is 28-year-old Noha.* When the war began, Noha was living with her husband and two young children in the city of Homs. One evening her husband left home to buy food but did not return. When Noha inquired about him, the police arrested her. For seven days she was jailed, interrogated, and tortured. Once released, Noha and her children fled to another area of Syria and then to a tent settlement in Lebanon. Life is hard, but worst is the fear of what will happen to her husband. She recently heard he is in prison and will likely soon be executed.

Jordan, Turkey, Iraq, and Egypt also house large numbers of refugees from Syria. In Jordan, CAM staff visited a refugee named Maher.* He and twenty members of his extended family are crowded together in one house. Maher and several brothers are working, but their combined wages barely cover the rent, and they risk being evicted.

Inside Syria, radical Islamic groups are targeting Christians. Recently a Christian doctor was kidnapped and cut into pieces. Christian villages in and around Damascus, Syria’s capital, are systematically struck by rocket fire.

CAM is reaching out to displaced Syrians inside the country and throughout the region with emergency aid, such as food, heaters, and blankets. When possible, we also provide Christian literature.

Millions are in great need. In 2014, CAM plans to continue reaching out to suffering Syrians in the name of Christ. The staff periodically visits Lebanon, Jordan, and Iraq to meet with refugee families and monitor the distribution of aid. Your prayers and support are greatly appreciated.

“And his fame went throughout all Syria.”  Matthew 4:24a

*Names have been changed to protect identities.

Information compiled from a variety of news sources.

If you wish to contribute to similar projects please click here.