Hope for a rejected widow with leprosy 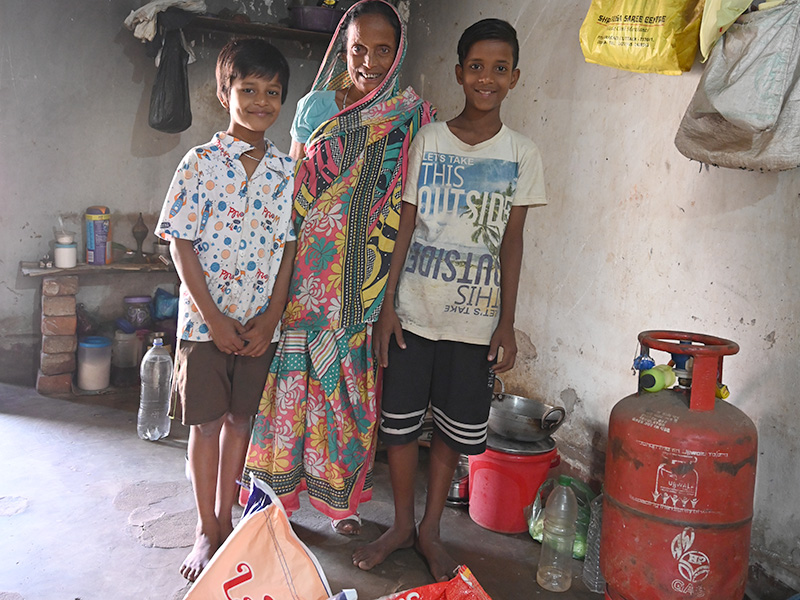 Twenty-five-year-old Manya stared at her blotchy skin—the dreaded sign of leprosy. This disease labeled her “untouchable” in her village of India and made her family an object of rejection and mocking.

These mental pressures were too heavy for Manya. She left her village for a leper colony, knowing she would likely never return. Manya married a man from the leper colony, and together they raised a son. Their only income was what they received by begging. Tragedy struck the family when Manya’s husband mysteriously died while begging one day.

Manya and her son were left to fend for themselves. When her son grew older, he became involved with the wrong company and began using drugs and alcohol. He also got married and became the father of two sons. Then he fell ill. Manya sold her house and some possessions to pay for his medical treatments, but it was too late. Her son passed away, leaving his wife and two sons in Manya’s care.

Shortly before India imposed a strict COVID-19 lockdown in early 2020, Manya’s widowed daughter-in-law ran away with all the money Manya had saved from begging. She also abandoned her two sons, leaving them for Manya to raise.

“My life felt like a burden,” Manya testified. “How is it possible for me to feed my two grandsons and myself? . . .
Their mother has taken all my money. With lockdown, the burden became even greater!”

A monthly Support-A-Widow food parcel shows care to Manya in her desperation. “Before I was enrolled in the widows program I used to . . . sit in front of the church gate and listen to the pastor speak about Jesus Christ and His love. I would always question God, ‘Why are you punishing me? I am helpless! I am hopeless!’ Many people tried to convince me to send my two grandsons elsewhere. But they are my hope and joy! How can I send them away?

“If it wasn’t for this food parcel, I don’t know how I would have managed,” Manya shares. “Because of those who . . . made it possible for me to receive this food parcel every month, I can feed myself and my two grandsons. As long as I am alive, God will help me. That is my belief. My future is in His hands!”

To help support the Support-A-Widow, please click below to give a one-time gift or start a monthly sponsorship.