Super Typhoon Haiyan, one of the most powerful storms on record, struck the central Philippines on Friday, leaving dazed survivors begging for help and scavenging for food, water, and medicine. The damage was significant with initial estimates of 10,000 people dead and 600,000 people displaced in Tacloban alone. The death toll is expected to climb rapidly as rescuers reach remote towns such as Guiuan, a town of 40,000 that was largely destroyed. 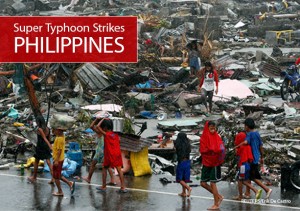 The surging waves and monster winds of up to 235 mph largely flattened Tacloban, the coastal city that bore the brunt of the storm.

“It is so difficult,” said Awelina Hadloc, a convenience store owner in Tacloban. “It’s like we are starting again. There are no more supplies in the warehouse and the malls.” She was looking for something to eat in the store warehouse that was almost bare from looting.

Most of the damage and deaths in the devastated areas were caused by waves that surged into towns, washed ships ashore, and swept away villages.

The scenes are not unlike the 2004 tsunami that struck South Asia. One news report told of bodies littering the streets of Tacloban, as people covered their noses with rags or old clothes to mask the stench.

Haiyan destroyed about 70 to 80 percent of structures in its path, one report said. Damages to coconut groves and rice fields were estimated at about $69 million. These are “massive losses” for the owners.

CAM is providing initial funding for emergency relief aid. We are working with several contacts and will probably  send personnel to the Philippines shortly to do further research and coordinate aid projects.

If you with to contribute to similar projects please click here.