Most of us grew up with loving parents to teach us
good from evil, take us to church, and instill in
us Christian morals. Sadly, this is not the case
for many Liberian children who grow up in a
witchcraft-practicing culture. The atrociousness of the
following true account may shock you, but hopefully it
will touch your heart and move you to pray for these
dear children in Liberia. 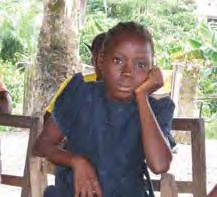 Lack of joy, from living in the darkness of evil
practices, is evident on this Liberian girl’s face.

In Kakata, Liberia, Mr. and Mrs. Blamo direct the
Children’s Future Orphanage, a home for orphaned
and abandoned children. All was seemingly peaceful
one night at the orphanage when Mr. Blamo suddenly
awoke. He discovered his four-year-old son John
missing from the room. Mr. Blamo searched outside
and came upon three children from his orphanage,
with his son. The children had carried little John outside
intending to practice blood-sucking procedures
that would have killed the boy the following day.

This practice of blood sucking is sometimes a literal
action and other times done in the dark spirit world.
This time the attack was to be made literally—they
were literally going to kill little John. But, as born
again believers, the Blamo family was protected by
the blood of Jesus that night, and the children were
not able to finish the terrible ritual. They said John’s
blood tasted “bitter.”

According to confessions that followed, eleven of
the orphanage children, ages six to fourteen, are involved
in witchcraft. The children say they do not
want to engage in these practices, but when their
spirit guide appears to them during the night, they
feel forced to follow. Their spirit guide usually comes
in the form of a deceased relative or other authority
figure in their life. Many of the children confessed to
other witchcraft practices as well. 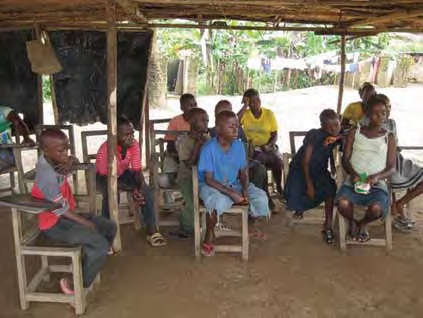 Pray for the 11 children at the Children’s Future Orphanage
in Liberia who are caught in Satan’s bondage.

It is hard to fathom mere children participating
in such frighteningly evil practices. Please pray that
these young ones could be released from Satan’s
bondage and submit to God and their God-given
authorities. Pray that as they reach the age of
accountability,they can fully comprehend salvation
freely offered by Jesus. Pray also for Mr. and Mrs.
Blamo and the church in Kakata as they deal with
this situation. May the name of Jesus Christ be glorified
and may we claim this powerful promise, “Ye
are of God, little children, and have overcome them:
because greater is he that is in you, than he that is in
the world.” I John 4:4

For more information on this program please click here.