The devastation continues to touch and shock the brethren on the ground in Japan. Continue to pray for the wisdom as CAM decides how best to help those in need.  Below is a brief update from CAM representatives in Japan.

As I again travel to a disaster area, I am reminded as one man here put it about the people living in the area hit by the tsunami.

Either they were dead or alive, saved or lost.  No middle ground.  Another man said, “It is good for people to try to share the gospel now but what about the 25000+ people who died from the tsunami?” We should have shared the news with them before the tsunami because now their destiny is sealed. Cars swept to the base of the hill.

In this land of over 127 million people, less than 1% call themselves Christians and according to the local churches here, most of them are in name only.

Many lives here have been shaken deeply as the country reels from 3 disasters back to back. First a 9.0 earthquake, followed about 20 min later with a tsunami, with that resulting in severely damaged nuclear reactors.

As we have traveled to the tsunami area we have been quite surprised by how little damage from the earthquake is visible. Considering that at the place where we are staying near Tokyo, the staff here said the building shook so badly that books were falling of shelves and pieces from the hanging celling was coming down; we are amazed. Japan is quite earthquake prepared with high quality builds. The interstates have patches at nearly every bridge and from time to time we see house roofs with tarps covering them.

Things look just close enough to normal that it is almost a shock when you get to the tsunami hit areas. There everything is total chaos. Vehicles are thrown around like toys. Thick mud covering everything. Debris from houses and business everywhere. Trains turned over onto their sides. Boats all through town. People standing in the cold poking through garbage piles and small fires here and there with people standing around trying to stay warm. And yes, it was snowing on top of that. Even here in Tokyo the electric went off after the earthquake and people told us of walking hours because all the trains stopped running. One lady told us she walked 20 km to get home. A gym being used as a cafeteria and distribution center.

As news of the devastation spread people went into panic mode. Buying all the rice, bread, noodles and water from all the stores. Only now almost 3 weeks after the tsunami are we starting to see the shelves full of food again. Many feared a shortage of gas and went and filled up their cars. People sat in lines for hours just to top off their car gas tank.

It has also been amazing how the people here have tried to take care of themselves. Churches and other volunteer groups have sent truckloads of aid to the affected areas. The government is also very active with the military delivering food and blankets to the thousands of shelters. Many schools and gyms were turned into shelters, aid centers, and cafeterias for people to come for a warm meal. We are told in one area the electric company is already planting new poles and putting up electric lines. And yet, you wonder where and how to even start cleaning up let alone helping get their lives back to normal again.

Continue to pray for Glenn and I as we try to decide & discern what God would have CAM do at this time. 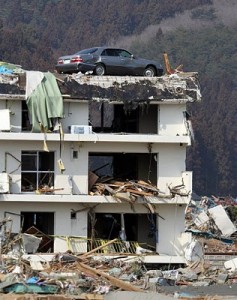 Strange Place For A Car