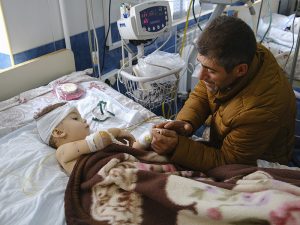 A man speaks with his child, wounded during shelling, in Stepanakert, the self-proclaimed Republic of Nagorno-Karabakh, Azerbaijan, Monday, Sept. 28, 2020. Fighting between Armenian and Azerbaijani forces over the disputed separatist region of Nagorno-Karabakh continued on Monday morning after erupting the day before, with both sides blaming each other for resuming the attacks. (Areg Balayan/PAN Photo via AP)