The war in Ukraine and a hard winter ahead 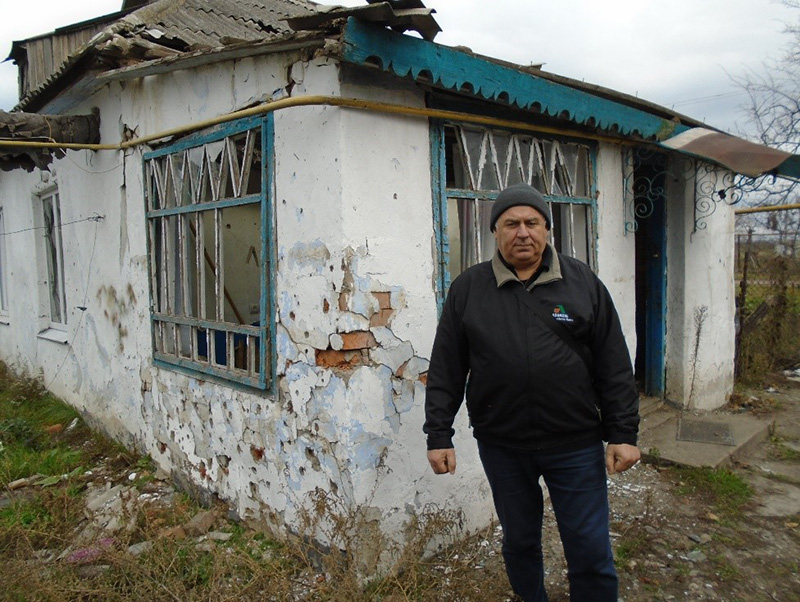 Air raid alerts went off soon after we left CAM’s warehouse in Zaprudya, Ukraine. That day, November 15, Russia fired nearly 100 missiles at cities all over the country, the biggest barrage since the war between Russia and Ukraine began. Many missiles were intercepted by Ukraine’s air defense system, but others still hit their targets.

With several other CAM associates, I recently visited Ukraine. War is always tragic. Our hearts were saddened by all the needless destruction, suffering, and death we saw and heard of.

The missile and drone strikes seem to be targeting Ukraine’s electric, gas, and water sources to create fear and anxiety ahead of the coming winter. At least 50 percent of Ukraine’s power-generating capacity has been destroyed, leaving millions of people without electricity. As temperatures plummet, people are in a state of near panic. They wonder how they will survive the long cold winter without gas and electricity. Firewood used to be an option in villages, but it is now extremely expensive and scarce in some places.

The war has displaced around 12 million people. Many of these people fled their homes with nothing but the clothes on their backs. A senior US official estimates that approximately 240,000 soldiers and civilians have been killed or injured.

In our visit to Kherson Oblast in southern Ukraine, a pastor pointed out the spot just outside his house where he and his family watched Russians shoot and kill two men they accused of being spies. He also showed us his trailer which the Russians used to haul their dead soldiers.

In this area we saw an enormous amount of war damage: ruined houses, schools, and commercial buildings, a demolished hospital, a large building that used to be a Mennonite-owned feed mill, many destroyed tanks and armored personnel carriers, burnt vehicles, dead animals, downed electrical poles, miles of trenches, and thousands of acres of unharvested crops. We were warned to be careful where we walked because of all the landmines.

A hard winter ahead

As winter approaches, food and firewood seem to be the greatest needs. It is one thing to be hungry; it is another thing to be hungry and cold. Some people are gathering roots from stumps or using dried cow manure for heating.

One elderly woman said she used to pick up fallen branches in the forest every day. Now that is not safe because of all the unexploded landmines. One of her neighbors stepped on a landmine, which blew off her foot.

To help Ukrainians whose homes have been damaged or destroyed by bombs and missiles, we are hiring contractors to repair or rebuild houses and also supplying small modular homes. One woman we visited, whose humble little house is being repaired, told us how everyone in her village was warned that the Russians were coming and they should flee. All who decided to stay were killed. 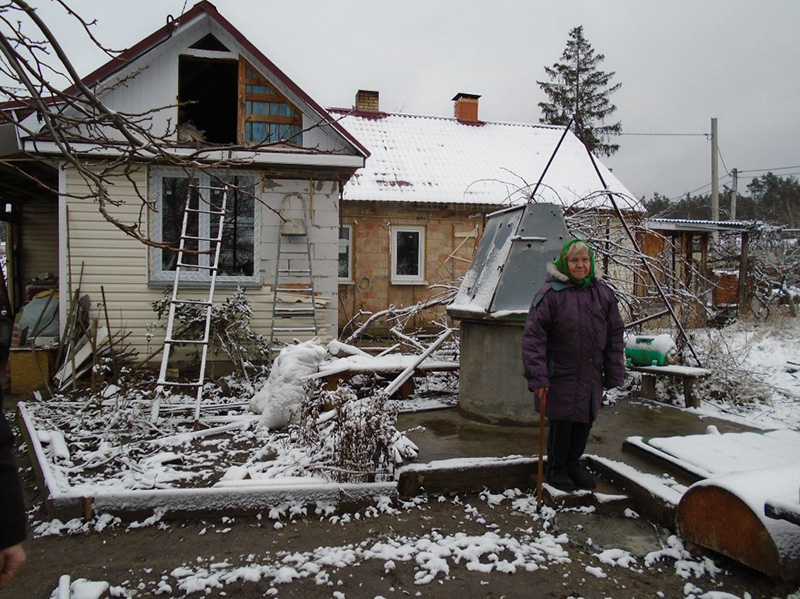 Ukrainian woman stands in front of her partially damaged house.

Doors open for the Gospel

Ukraine probably has the largest number of Christians most closely aligned with conservative Anabaptist beliefs outside of North America. Many Ukrainian churches once had a link to the Mennonites in the time of the Soviet Union, and many Mennonites in the West have roots in Ukraine. We help around 1,000 Ukrainian churches provide for the needy in their midst. Since the war began, pastors have asked, “Will CAM stay and continue to help us during this difficult time?” When our staff members say, “Yes!” some begin to cry. In addition to humanitarian aid, we supply large numbers of Bibles, New Testaments, Bible story books, and Seed of Truth magazines.

CAM’s warehouse south of Kyiv has been trying to keep up with demands for food, firewood, medicine, comforters, hygiene kits, Bibles, and other aid. Thanks to your ongoing generous support, our trucks are delivering many tons of food, firewood, and other items each week all over Ukraine. 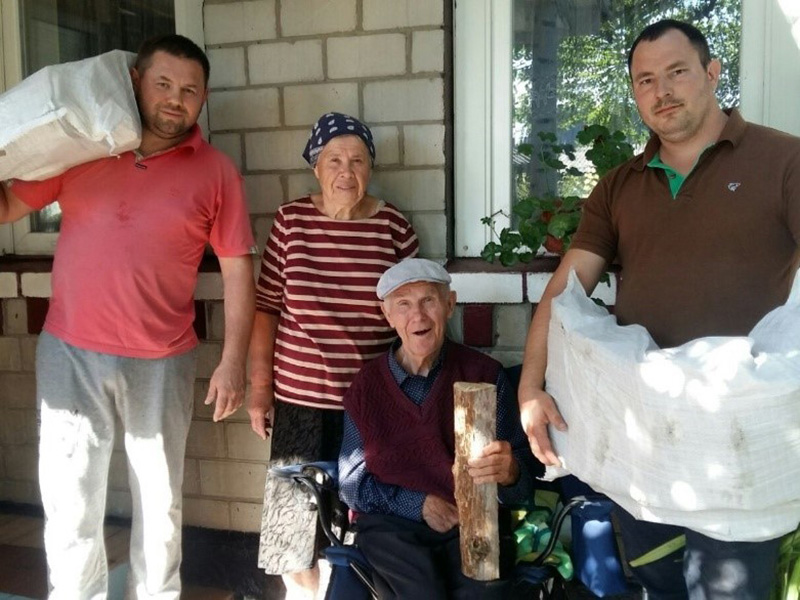 Our drivers told us about the tears of joy from thankful recipients, especially the elderly, widowed, and handicapped. A staff member said, “I have been working for CAM since 2006, but some of the needs I am seeing now have shocked me!” We also supply aid and literature for other contacts and organizations to distribute. 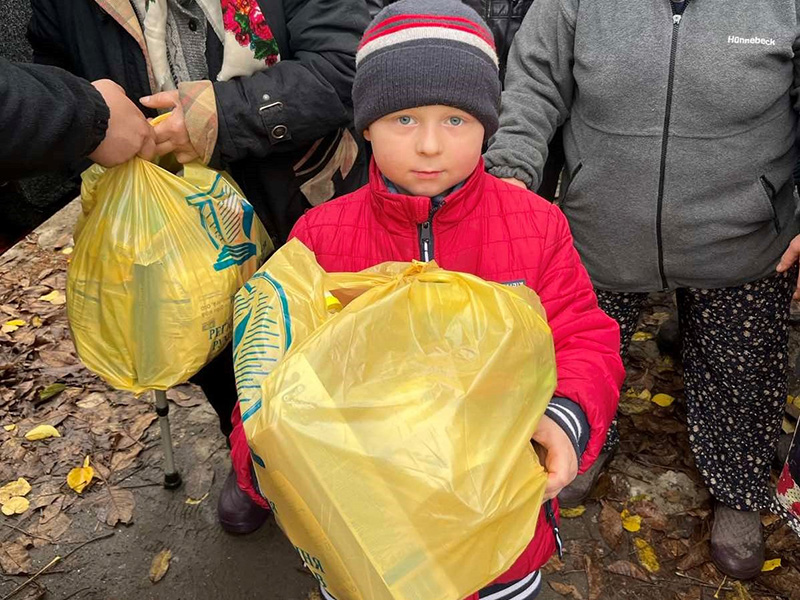 Ukrainian boy with a bag of groceries

This aid is opening many doors for the Gospel. People who previously would never have walked into a church are now hearing about salvation through Jesus, some for the first time. A staff member says, “This is one of the many miracles in our country. In one place, nearly everyone in the village repented.”

Our staff members said, “Many people are thanking God and praying for all those involved in helping them, from the supporters in America to the truck drivers who deliver the help and everyone in between.”

In spite of the danger our staff and partners face at times, one of them expressed, “With the needs so urgent and desperate, the feelings of fear are overcome by the feeling of fulfillment that comes from being able to help those in need.”

At this point, we are estimating a budget goal of $22.5 million for the Ukraine project in 2022-2023, and we have received $11 million to date. To all who have shared, thank you and God bless you. I wish I could have taken you along to Ukraine to see how much it means to those on the receiving end of your love, gifts, and prayers!