Cholera cases at the CAM La Source clinic keep winding down. Cases steadily declined from 40-50 per week to as low as 15 last week. Other parts of Haiti, however, continue to see an increase. A hospital in Bombard had a sudden upswing in the number of cholera patients this past week. Please pray for the people of Bombard, Haiti, as they face the cholera crisis.

Last week a young man was admitted to the CAM clinic with vomiting and abdominal pain.  Quite vocal about his discomfort, he spent most of the day, moaning loudly, “I’m dying, I’m dying, I’m dying!  Oh my stomach, ooooooo!  Oh my stomach oooooooo, oh my stomach oooooooo!”  His moans were interrupted by occasional urgent requests, “Nurse, can’t you get me something to sleep? Can’t you do an x-ray?”, and punctuated by occasional outbursts of projectile vomiting after which he would relax and rest for a little before the pressure and pain would start to build again.

We were all glad when this man could be discharged the next day, and the next few nights the other patients would howl with laughter as they imitated his moaning and groaning and carrying on!

To the witchdoctor or to the clinic?  – as told by Bethanie BurkholderFear and uncertainty often fill the Haitian people’s minds as they watch their family members suffer from cholera. Is cholera really a natural illness?  Is it caused by a curse?  It seems like a curse, attacking some families heavily and others hardly at all. Where is the best place to go for treatment?  Some people say drinking oral rehydration solution will make you sick which makes sense since everyone you see drinking it is indeed sick.  Who should you believe?

This week again we had a situation in which a family requested we discharge a patient, a sixteen-year-old girl, so they could take her to the witchdoctor. The girl had her family concerned because about twice a day she would cry out and seem unresponsive, but would quickly begin responding appropriately again.  I attributed it to the emotional toll taken on her by the sudden death of an older sister just a week earlier and the death of an uncle immediately afterwards.  Again it was difficult to know what to do.  We respect the rights of families to make choices for themselves.  We cannot force treatment on anyone.  But the girl’s parents had not come in person to ask for her discharge.  They had sent others.  The girl was still having at least four liters of diarrhea and vomiting every day.  I didn’t feel comfortable sending her away.

“We came to leave with her.”

“But she isn’t discharged yet.”

“We’ll bring her back if she gets worse again,” the young men who had come to fetch her assured us.  “We need to ‘take a different path’ with her.  You know she just lost a sister and an uncle.  There’s something more than just physical illness at play here.”

“I’m sorry, but if you decide to leave with her before she is discharged, you’ll have to go somewhere else with her for care if she gets worse.  We won’t take her back.  Where are the people who are responsible for her?”

“I thought her father was responsible for her.”

“Well, if he wants you to go with her I can’t stop you, but you’ll have to take the IV out yourself.  I’m not going to be responsible for someone’s death,” and I walked away.

It was clear the men didn’t know what to do.  I quickly spoke with one of our Haitian employees and explained the situation and he took over from there, finishing the job of dissuading the family from leaving. Two days later the girl was discharged. As the family left I encouraged them again to put their hope in God rather than in other things, but I wouldn’t be surprised if they went straight to the witchdoctor after the girl was discharged.

God’s provision … Supplies exactly when they were most needed. One time the clinic had used up the last of the small gauge needles, and just as the last ones were used, the new volunteer nurses arrived with a new supply of the exact kind of needle  needed for cholera patients!

God’s provision … a building EXACTLY the right size to accommodate the number of patients we received; if the building had been any smaller, it wouldn’t have worked.

God’s provision … the EXACT number of beds we needed; several times we had used our last mat, but we always had enough beds.

Thank you so much for your prayers, encouragement and support! 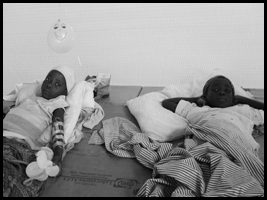 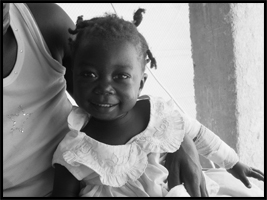 Another satisfied “customer”—happy at least until someone approached to check her pulse!