The following account is about real people, and was told by our staff as though speaking for Markendy, but we took writer’s liberties to put it in story form.

Hello, my name is Markendy. I live in northwestern Haiti. One day I felt sick, very sick. I vomited several times and had severe diarrhea. My parents were scared; they did not know what to do. They thought I would die.

Some of my relatives almost convinced my parents to take me to the witchdoctor. They thought someone had put a curse on me, making me sick. But then, we heard that some people who were sick just like me had received care at a place, far away, called La Source. I heard that a clinic in La Source helped people who were sick, just like me! Would going to the clinic be the right thing to do? “No!” my relatives said, “Those people can’t help you; you should go to the witchdoctor, and he’ll help you!”

My parents didn’t know what to do. Finally after much discussion they decided to take me to La Source. They strapped me onto a donkey, and we plodded towards La Source. It took several hours, and when we finally arrived I was almost unconscious. I do not remember what happened next, but my parents told me later.

When I arrived I was so limp and lifeless the nurses didn’t know if I was dead or alive. I had lost so much fluid my body was beginning to shut down. The nurses tried to find a vein to start an IV. They couldn’t find one. They poked the veins in my legs; they poked the veins in my arms. But as soon as they would stick a needle in a vein, the vein would immediately collapse. I didn’t feel anything because I was unconscious.

As a last resort, Nurse Bethanie decided to use a stomach tube and pump fluids into my stomach. I try not to think how that would have felt! After the fluids flowed through the tube for a while, I started to wake up. I still felt sick and started to act agitated. I pulled out my stomach tube. I started vomiting again. My parents started worrying all over again.

Once again the nurses searched for a vein in my body. They couldn’t find any. They resigned themselves to continue with the tube feedings. But by the next morning I had not yet recovered. My eyes were sunk into my head and my pulse was weak. My parents started having second thoughts—should they have taken me to the witchdoctor instead? Were my relatives right? What should they do?

I am thankful my parents decided to keep me at the La Source clinic, because Nurse Joanna found a very thin vein in my wrist and got an IV started! Within a few hours I started feeling better and acted more and more energetic. Was this the end of my sickness? Was I recovered? Sadly, I wasn’t. By the next day I started going into shock, and the nurses couldn’t figure out why. I soon went into a coma like condition. My parents again thought I was going to die. But, God was able. Lots of people prayed for me, and by that evening I pulled out of my coma and asked for a drink. I’m still feeling sick, but I’m getting better. Thank you for praying for me! 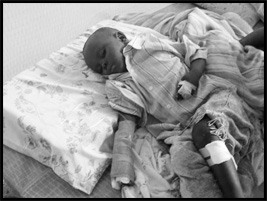 Markendy at the CAM clinic in La Source

The La Source clinic has seen a drop in the number of cholera patients in the last few days. Predictions remain that that the epidemic will peak in January, and then slow down and eventually fizzle out sometime in 2011. No one except God knows exactly when this crisis is over. If you would like to have more information on similar projects please click here.