An unpleasant landmark happened at the CAM clinic in La Source this past week. They experienced their first deaths at the cholera hospital. Bethanie Burkholder isn’t sure of the causes of these deaths, but she thinks the deaths happened because the clinic couldn’t obtain the preferred treatment for cholera—Lactated Ringers Solution; instead, we only received Regular Ringers Solution that doesn’t contain the electrolytes that Lactated Ringer Solution does. Bethanie reports, since we started treating patients with simple Ringers IV solution we had four patients go into significant metabolic acidosis in which they start to hyperventilate, go a little crazy, and then eventually go into a coma and potentially die. I can’t say for sure it was the change in IV fluids that caused us to suddenly have four such patients, but that was the only change in treatment that we could think of.

*The first death was a woman who died at 1:00 a.m. on Christmas day. She appeared to have gone into kidney failure as a result of her severe dehydration. She had stabilized after two days in the cholera hospital two days but started to go downhill again.
*The second death happened last Sunday evening. A patient went into metabolic acidosis. The clinic staff had fought hard to get IV access in him when he came to the clinic. They finally got access in his leg, and the patient was recovering well until the metabolic acidosis set in. He died within 24 hours.

Judna’s Story
Seven-year-old Judna provided the CAM clinic staff with some tense moments. Her diarrhea subsided gradually over her four-day stay at the cholera hospital. She was on the road to recovery when a delegation from her home community showed up late one evening and decided it was time for her to go home. Some of the people had gone to the witchdoctor for her and were told things were grim and they should come get Judna. Bethanie tried to convince them Judna was responding to the treatment and would be released soon.

“No, we’re taking her,” the delegation responded. Judna’s dad who had been by her side all day and all evening gradually woke up, trying to orient himself to this sudden turn of events and unexpected visitors from his community. Thankfully he decided to keep Judna in the care of the clinic staff. But the battle was not over yet. Bethanie realized that the witchdoctors sometimes do have power to predict what might happen and many prayers went up that night on Judna’s behalf. What would happen if she died during the night? Who would prevail? Which side would win? The staff rested in the fact that Judna was under the care of Someone much bigger than even the greatest witchdoctor. Judna was resting under the wings of God. She survived the night and was discharged the next morning. Praise God!

Amelia’s story
Cholera can hit with breathtaking suddenness. Amelia was on her way home from the CAM clinic with her child who had just been discharged, when the cholera attacked her. It struck hard, leaving her unable to reach home or return to the clinic. People found her along the path, put her on a bed, and carried her to the clinic. That first night was a race to try to get fluids into her as fast as they were coming out. She had 12 liters of vomiting and diarrhea in a 10-hour time span. It was a joy to see her turn for the better and be discharged even though she still was showing some signs of metabolic acidosis. There is hope that it will correct itself as time goes on. 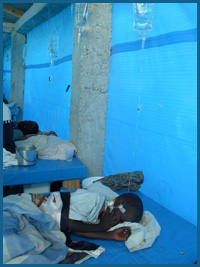 This IV was an answer to prayer.  It always is when we resort to the jugular vein! 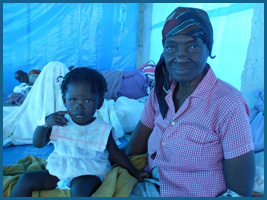 Grandmother and granddaughter both ready for discharge together.  This family had four members hospitalized with cholera.

The cholera epidemic isn’t going away. The battle keeps raging. It seems hopeless. People are dying. Yet with each patient that recovers and with each passing day, hope remains, because God remains in control. It’s not hopeless. The epidemic may continue to rage, but with God’s help we will be victorious.