Haiti Cholera-Children, Cholera, and a Sliver of Hope

Last week the La Source clinic had a number of very intense cases—children with cholera. Getting IVs into severely dehydrated toddlers and preschoolers is an art mastered by few. But God came through again.

When five-year-old Djonkly came into the clinic last Tuesday he looked like a goner.  His eyes were rolled back and sunken.  He was floppy and slipping in and out of consciousness.  Medical personnel quickly tried to start an IV on him, but as is often the case, no veins could be found.  His extremities were ice cold. The staff decided to go directly into his bone.  Fortunately several screw-in needles designed for that purpose were on hand, but Bethanie Burkholder said, “I had never used them and they didn’t come with instructions. We prepared the site and since I wasn’t familiar with how it was supposed to screw in, I used the pushing method instead.” By this time a crowd had gathered around the bed, spectators to the race between cholera and medical intervention. When the needle finally penetrated the bone with a sudden surge, there was an audible gasp and sigh of relief. Fluids were started and Djonkly began his road to recovery.

Here are some before and after pictures of Djonlky. 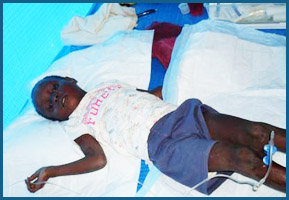 Before (notice the needle in his leg) 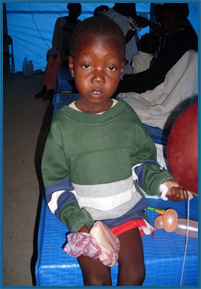 Bethanie Burkholder writes, “Three-year-old Rose Geurline arrived at our clinic last Wednesday morning. Her eyes were sunken, and she was completely floppy. Her parents had carried her 3-4 hours to the clinic and by the time she arrived it was almost too late. She too was slipping in and out of consciousness, hardly swallowing the sips of Pedialyte we poured into her mouth.  We looked at her cold little arms. No veins. We searched her hands vigilantly. Nothing. Any scalp veins? No. Her mom looked on, composed, but obviously suppressing deep emotion and fear. Rose Geurline vomited and had diarrhea as we worked on her, losing even more precious fluids. We went down to her feet. And wonder of wonders, a beautiful little vein popped up right by her ankle!  And into that little vein we dripped IV fluids for the next several days. She went home today looking good; another living reminder of God’s care and provision.” 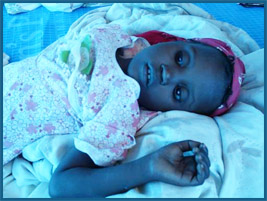 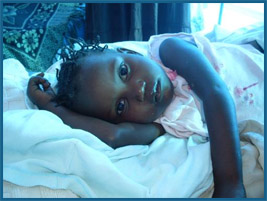 For the first time ever since the outbreak began, the La Source clinic had fewer new cholera admissions then the previous week. We hope that means the Cholera Epidemic is finally peaking. 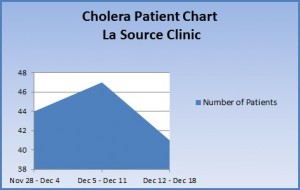