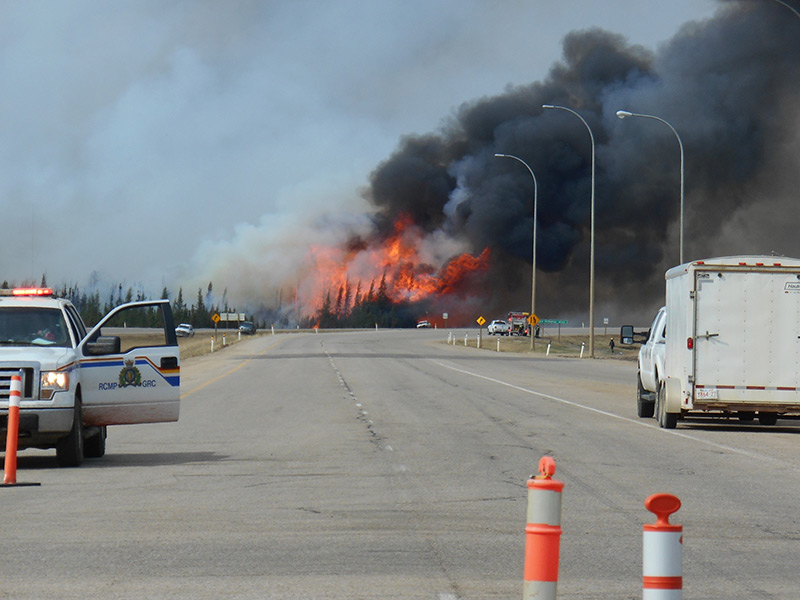 Fort McMurray became the center of national attention in the first week of May 2016, as wildfires raged within the city of 80,000 residents. What began as a normal occurrence of a forest fire, quickly escalated into a large-scale emergency as it reached the city within two days, and forced a massive evacuation. The routine of ordinary life was brusquely changed, as families scrambled to collect personal belongings before leaving the city. They began to focus on survival.

Evacuation was no easy process as the main roads were quickly overwhelmed with traffic. Frantic people could feel the heat in their vehicles as flames reaching 100 feet in height consumed the dry grass and trees along the edge of the highway. Reports indicated gridlocked traffic that was purportedly moving at a snail’s pace of 4 feet per hour at times.

Fire quickly transforms into a ruthless enemy and has no respect for property or possessions. Fleeing motorists watched in horror as a motel erupted in flames. When the wildfires reached gas stations, explosions occurred, causing vehicles in close proximity to have their windows blown out. As the fire consumed buildings and personal valuables, life became precious as residents concentrated their efforts on escaping the inferno.

Christian Aid Ministries, Canada, regularly monitors national tragedies of this nature. Our goal is to respond to catastrophes and reach out with practical assistance to affected victims of disaster.

A delegation from our Rapid Response Services program arrived in the area on May 6, to investigate the situation and develop an emergency assistance plan. Our RRS Program Director reported the following from their visit to provincial evacuation centers:

“The evacuees shared dramatic stories of their experiences. Each individual that was interviewed had a unique, personal journey, filled with harrowing escapes and emotional duress. Countless homeowners only had a few minutes to collect their belongings before fleeing from their endangered houses – some with only the clothes on their back. One family shared about a quick stop at Wal-Mart to fill a prescription for a diabetes medication before evacuating, only to discover that fire had reached the edge of the parking lot when they returned to their vehicle. Others told of waiting in line up to an hour to fill their vehicles with fuel for their journey out of town. Many evacuees do not know if their homes are still standing or if they have been reduced to ashes. Through the entire ordeal, the community exchanged numerous acts of kindness and generosity, as they shared rationed fuel, offered rides to one another and opened their homes to provide lodging.”

Local communities of caring people have provided adequate supplies of clothing, food and water for displaced residents of Fort McMurray. CAM, Canada, will focus its resources on mobilizing the Rapid Response Team to assist with cleaning up after the disaster. If you would like to be of financial assistance to this effort, please use the options below to donate.