“It’s the worst flooding in over 160 years,” says George of St.- Anne-de-Sabrevois, Quebec.

Sandbags line the streets, debris piles up in yards, and people use boats and canoes to navigate the streets. Mental health help lines are receiving up to one hundred calls per day.

Welcome to southern Quebec, the Richelieu River Valley. Flooding here began in late April; in mid-May waters dropped but dashed hopes as it rose again near the end of May. The Richelieu River, fed by Lake Champlain, has reached its highest level in recorded history. Roughly 3,000 homes have been flooded and approximately 1,000 people have been evacuated. People are forced to live with relatives or friends and others resort to hotels. Predictions indicate it could be several weeks before waters recede completely. 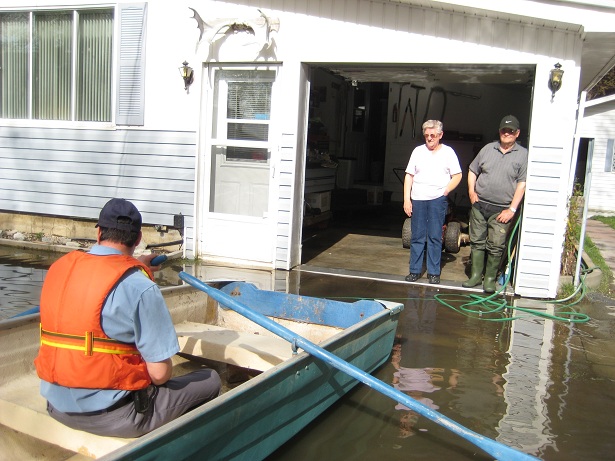 Couple glad for visitors – waiting for the Richelieu River to drop.

In Manitoba, the month of May also brought record-breaking floods causing over 3,500 people to be evacuated from their homes. The Lake Manitoba and Assiniboine River areas were the hardest hit.

The military was called in to help flood victims and to lay sandbags in both Manitoba and Quebec. A total of 440,000 sandbags were placed in Manitoba.

And further west it’s not floods, but fires that are wreaking havoc. One third of the town of Slave Lake, Alberta, was lost to a raging wildfire. All 7,000 residents were evacuated and hundreds lost their homes. Churches, the town hall, and the library burned down.

“It’s heart-wrenching as people lose their homes, their livelihood,” the National Post quoted the mayor of Slave Lake as saying. “It’s truly devastating.”

Elsewhere in Alberta, other wildfires raged throughout the month of May. In mid-May, over a hundred fires were reported, dozens of them out of control. Hundreds of thou­sands of hectares of land have burned.

In the southeastern United States, a tornado outbreak from April 25-28 may have been the largest in U.S. history. A total of 325 tornadoes killed at least 340 people, with thou­sands more injured, and up to 10,000 homes and buildings destroyed. Millions were left without electricity. Damage is in the billions of dollars. Later a monster tornado struck Joplin, Missouri, and killed 125 people. 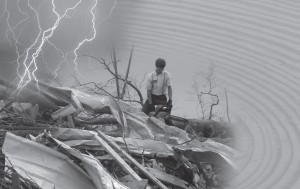 The U.S. is not immune to flooding either. Flooding along the Mississippi River affected more than four million people in 63 counties and parishes adjacent to the Mississippi and Atchafalaya Rivers across a 625-mile span. To save cities, the US Army Corps of Engineers took the rare step of flooding thousands of acres of farmland.

Volunteers on CAM’s Disaster Response and Rapid Response projects have the blessing of being the hands and feet of Jesus and a Christian witness to people who have lost earthly possessions and, in some cases, family members.