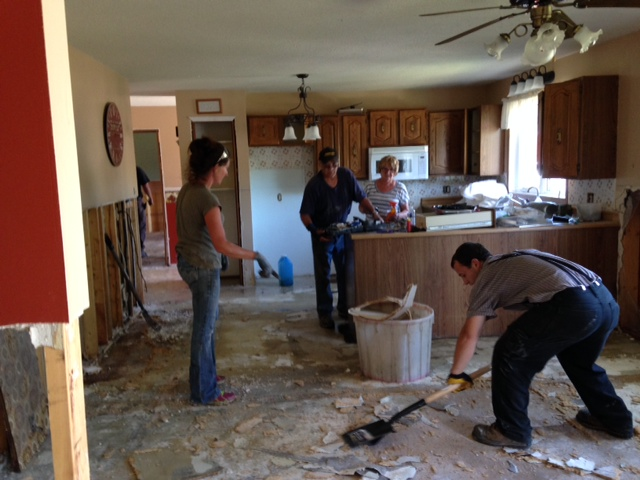 After plundering the eastern seaboard of the USA, Hurricane Arthur finally reached eastern Canada on July 5.

Adam lives in southwestern New Brunswick with his two young children. His driveway is washed out. The roads leading to his house are impassable. Several buildings on his property have been damaged. “We’re essentially stranded here right now,” he reports. They have several days’ worth of food and water. He desperately hopes that he will not need to leave his children behind to battle the weather and seek assistance.

In the west, the Assiniboine River can no longer hold the torrential rain­storms that have descended violently on northern Manitoba and Saskatchewan.

The river reached a peak flow of 52,100 cubic feet per second – the normal rate is 1,600. Provincial dikes are straining to contain the excessive volumes of wa­ter. Officials believe that the situation is beginning to reflect the urgency of the flood of 2011. More than 700 people from 50 municipalities and communities have been forced to evacuate their homes. Others choose to ignore evacuation orders and desperately try to keep floodwaters at bay. Frustrated people from smaller villages are convinced that they have been forgotten by the government as officials turn their ener­gies towards saving bigger cities.

Giselle’s home is surrounded by water in northern Manitoba. “It was so nice to see all the help that came out. I don’t know offhand who organized it, but it was really nice to see volunteers from town come and help to sandbag,” she says with deep feelings of gratitude. She is but one of many who need helping hands to save their houses.

Despair, desperation, panic and discouragement. This describes the state of affairs when Rapid Response crews move in to devas­tated communities. They assess the situation, offer assistance, and bring hope to those who gratefully receive the offer of aid.

CAM of Waterloo plans to continue working in the disaster areas. With mem­ories of the 2013 Alberta floods in the back of our minds, there is the potential to expand into the Canadian West. These ambitions would require the purchase of another fully stocked trailer and the orga­nization of a new Team Unit.

If you feel led to support the work of CAM’s Rapid Response Services use the donation link below, your gift would be greatly appreciated. We desire to demonstrate our “faith by our works” (James 3:18) so that each recipient will catch a vision of the love of our Heavenly Father and respond to His call to salvation.