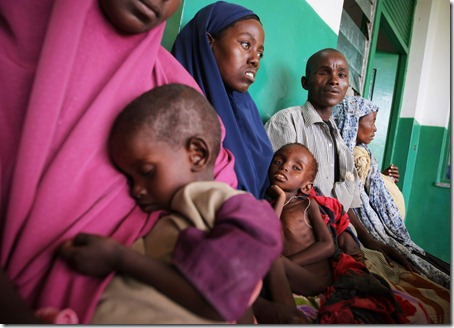 Some areas of East Africa are experiencing its worst drought in sixty years, and tens of thousands of people have died from malnutrition-related causes. In Somalia, described as the “epicenter of the famine,” more than half the population is in urgent need of food, with 3.7 million people at risk for starvation.

A UN report says the last time conditions were this bad was in 1992 when hundreds of thousands of Somalis starved to death.

Each week, around 5,000 Somalis are fleeing over the border to refugee camps in Kenya and Ethiopia but are disappointed to find the situation not much better than the one they left. Those who survive the trek are met by overcrowded camps that don’t have enough resources. At the refugee camp in Dadaab, Kenya, about 70,000 people live outside it, under huts made of sticks and plastic sheeting for a little shelter from the elements.

Some walk for days and days to find help. United Nations official Josette Sheeran reported seeing large numbers of children extremely weakened by the long journeys in search of food. Some people have to leave family members along the road and go on alone. Sheeran said, “I spoke to one woman who had lost three of her children along the way . . .” Most who arrive at the camps are badly malnourished.

A third of the children in Somalia are so malnourished they will need special formula food to nurse them back from looming starvation, said a news report. Access to areas in need are limited by an al-Quaida militant group, and humanitarian aid is hindered by rebels that demand “taxes” for allowing the aid to pass through.
CAM is dispatching an investigative team to Somalia and plans to help as best we can. The needs are enormous. With God’s help and your support, we will do what we can to bring hope in this shattered part of the world. If you would like to help, click on the donate button at the bottom of the page. Your funds will be used in the Somalia Famine Project.

Note: This need has been filled for now. May God bless you for sharing.