Famine in Africa! Millions of lives at risk in Horn of Africa

In the most severe food crisis in the world today,
thousands of people have died and millions are struggling
to stay alive. Severe drought has seriously affected parts of
Somalia, Ethiopia, and Kenya. In some areas, the past two
years have been the driest in sixty years. The United Nations
has declared a famine in parts of southern Somalia. 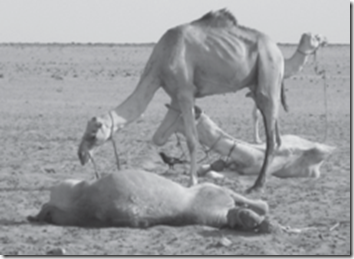 Thousands of Somalis are fleeing over the border to
refugee camps in Kenya and Ethiopia. Some people walk
for days and days to find help. One woman said she lost
three of her children along the way.

Those who survive the trek are met by overcrowded
camps that don’t have enough resources. The world’s largest
refugee camp, at Dadaab, Kenya, is built to house 90,000
people; the camp now has over 400,000.

Access to areas in need are sometimes limited by Muslim
militants, and humanitarian aid is hindered by rebels who
demand “taxes” for allowing it to pass through.
CAM has a team on the ground to research the needs and
look for ways to partner with other groups to organize food
assistance and development projects. The team will monitor
and assure integrity for these projects.

Many people in the drought-stricken areas are pastoralists
(herdsmen). “Livestock is the backbone of the economy
here,” reported our research team. “When the livestock
(cattle, camels, goats) dies, the people will soon follow.”
The team members talked with desperate people who
travel five or six days to water sources with their goats and
cattle. Their camels get a drink only twice per month and
travel forty to fifty miles from their pastures to water.
Trucks haul water into some villages, but the poorer people
cannot afford to buy it. Our team visited a shallow well near
Marsabit, Kenya. Several men had crawled down the well
shaft, where large sticks served as a ladder, and formed a
bucket brigade to bring water up out of the well. They scooped
up to thirty gallons or so and then waited twenty minutes
until another puddle formed at the bottom. Thirty women
stood waiting to get their containers filled. Many had waited
the previous night and all day for their turn.

The needs are enormous. With God’s help and your
support, we will do what we can to help sustain life and
bring hope in this desperate part of the world. We are giving
first priority to needy believers (Gal. 6:10). If you feel led to
help, your gift and your prayers will be greatly appreciated.
God bless you!

Note: This need has been filled for now. May God bless you for sharing.